“Narelle Jubelin is a commodities trader, buying low, selling high, tracking objects as they and their ideological underpinnings traverse the globe. In 1991 Mary Jane Jacob curated a series of city-wide installations for the Spoleto Festival in Charleston, South Carolina. Jubelin chose the US Customs House as the site for her ongoing inquiry into colonialism and trade. The customs house, built just before and after the Civil War, is located at the historical crux of slavery and as the seat of tensions between Federal and States' Rights, between the selling of commodities and the tariffs and taxes applied to their import and exchange. Installed in the building's two-storey atrium or Business Room, Foreign Affairs introduced artifacts and artworks into the closed confines of government bureaucracy, making for an accounting of a rather different kind: the tallying of museum and non-museum, public and private, 'high' and 'low' artifacts, presaging Fred Wilson's rather more well-known museological intervention, Mining the Museum (Maryland Historical Society, Baltimore, Maryland, 1992). (Margaret Morgan, Reg & Joy Grundy Collection, Bonhams, http://www.bonhams.com/auctions/21362/lot/78/?category=list&length=50&page=2)

“In the installation, called Foreign Affairs the artist pinpointed actual and metaphoric similarities and differences between Australia and Charleston, united at they are in their colonial roots. This complex show – composed of four sets of miniatures placed in four corners of the mezzanine level of the Customs House – referenced particular aspects of Charleston’s history, and charted the relationship of that history to aspects of internationalism. The four sets of petit points included renditions of ivory portrait miniatures and miniature-like samplers of a Guggenheim catalogue list. The other two sets include renditions of slave tags and ironwork.’ (Diane Losche, ‘Subtle Tension in the Work of Narelle Jubelin’, Art and Australia, Winter 1992, Vol. 29, No. 4, p. 465) 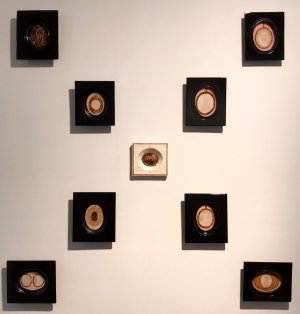