For many years Norrie and her family would regularly travel to Samoa for their holidays, visiting the village of Lalomanu. In 2009 this beautiful place was the epicenter of an earthquake, with the subsequent tsunami stripping the surrounding amazing coral reef.

A few years later, when some of the village had been rebuilt, Norrie attended the wedding of an Australian woman and a Samoan man.  She witnessed the preparations for the wedding that took days to create, photographing the event, and later developing the image through her extensive screen printing and painting techniques.  The energy, lushness and colour of the wedding, contrasts with the grey of the sea, devoid now of the once abundant coral and sea life.

It could be seen to have an element of National Geographic’s in this work but equally there is a considered sense of another world. Although a tourist destination, it is a poor island but with great resilience and beauty. 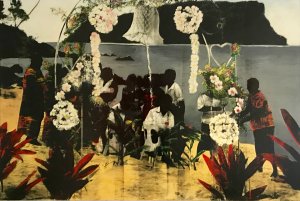