‘An uncanny and anarchic streak prevails in Angela Brennan’s irreverently eccentric abstractions, which, almost in spite of themselves, are profoundly shaped by modernism. A deep set pleasure principle drives the creation of works of sensuality and beauty.  Other works – lurid and indecorous – operate against the grain.  At once cerebral and tactile, the artist lets life into her pictures. Finding form for thoughts and feelings, she makes room for the viewer, to look and linger, and work things out for themselves. Spontaneous and intuitive, ebullient and bright, Brennan’s work makes a plea for freedom and dialogue, and against constraint. In a world where text and theory operate to legitimise the work of art, Brennan’s work absorbs and parodies the regulatory authority of words and reason.  Brennan unpicks and tickles the familiar constructions of meaning, freeing words to play in fields of colour and navigating the divide between perception and cognition.’ (Max Delany, ‘Foreward’, Angela Brennan Every Morning I Wake Up on the Wrong Side of Capitalism, Monash University Museum of Art, Melbourne, 2006, p.3) 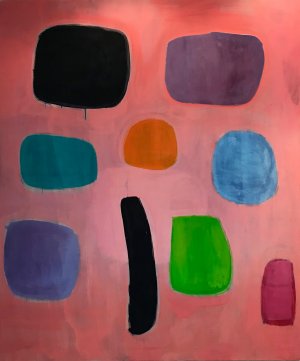 Image courtesy of the artist and Niagara Galleries, Melbourne