"For Quilty, the conventional landscape vista and the concept of Australia as being defined by the 'desert, the outback and the Artist-hero has lost its currency in the highly urbanised environs of metropolitan Sydney. Comprising a kerbside medley of cars and vans on multiple canvases of varying scales, ache (the 2006 exhibition of Quilty’s) depicts a more accurate rendering of Quilty's suburban situation….Far from vessels which transport passengers from A to B, Quilty sees every vehicle as a telling extension of its owner, a prosthesis of each character type perhaps. They can also be viewed as a symbol of the initiation process of almost every young Australian into the mobile market economy, a sexual rite of passage or a first taste of freedom for every new owner….

Quilty often depicts subjects which refer to much broader themes of cultural identity and the strange ways in which we construct meaning and individuality in our post-colonial habitat. However, what is most striking when considering these works is the unapologetic and sensual manner in which he executes them. It is the physical treatment of the subject which gives weight to the issues being addressed: these works are as much about painting as they are about sociocultural identity. Each 'portrait' emerges through an unabashed application of paint, creating areas of light and shade with confident swathes of well-observed colour. He paints these vehicles in a style verging on Fauvism with a reverence for their individual form, recreating the nuances of bodywork and presence with an economy of brushstrokes and great slabs of impasto. Although the appropriation of the 'everyday' and far-reaching definitions of the Australian identity in painting are by no means unexplored genres, Quilty's paintings go beyond these tested conventions, reinvigorating our sense of materiality and process. Sensuous and tactile, these are surfaces which celebrate the possibilities and immediacy of a contested medium.” (Clare Lewis, Ben Quilty Ache, 2006 http://www.benquilty.com/text.php?text=20120316150023) 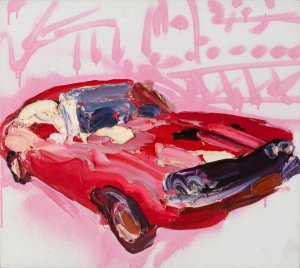