“The remarkable development in Larter’s practice into the 1960s was his consuming commitment to representing unfettered, pleasurable sexuality, through his audacious representation of women.  His models - primarily (his wife) Pat - are displayed all over the picture plane; they roll, they flash, they spread. Larter gleefully mined soft porn, art history, pop culture and contemporary advertising in his paeans to ordinary living and its freedoms, but the paintings exist beyond tease and titillation, they are self-referential: sex is not the hook, it is the catch.” (Deborah Clark, ‘Richard Larter: eros and civilisation’, Richard Larter, National Gallery of Australia, 2008, exhibition catalogue, p.107)

It was during the 1960s that Larter adopted a hypodermic syringe as his painting tool. As Larter notes “In spite of the painting’s appearance it was a heavily planned work (pencil workings may possibly be discerned under paint) the result of many sketches and diagrams - the spontaneity comes solely from the paint application both by brushes and hypodermic syringe - which is really like drawing in paint - only it was runny and fast-flowing - making me work quickly.” (Deborah Clark, ‘La comedy humaine, Richard Larter, National Gallery of Australia, 2008, exhibition catalogue, p.35) 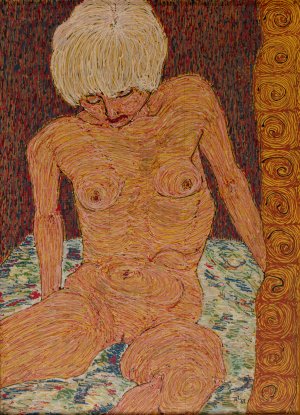 Image courtesy of the artist's estate and Watters Gallery, Sydney

☆ Add to wishlist
Richard Larter will perhaps be best remembered as one of Australia’s leading Pop Artists, though his work is difficult to confine to one fixed movement or style. Born in Essex in 1929, Larter served a dispiriting stint in the British Army from 1947, during which time he determined to become an artist. He was spellbound by modern art in Paris where he found colour in Monet and Matisse and the nude in Toulouse-Lautrec, Schiele and Manet’s Olympia. He was further inspired in Algiers in 1951 by the decorative motifs and mosaics of Islamic art that he admired further in the works of Gustav Klimt.

Sex is the core subject across Larter’s art, especially representations of the female body. He often painted his wife, the performance artist Pat Larter (1936-1996), who would playfully pose to mimic soft porn and strip teases. Always naked rather than nude, Larter’s women nonetheless avoid being pornographic, rendered as they are with intimacy and with humour. As the curator Deborah Clark wrote in the National Gallery of Australia’s major 2008 retrospective of Larter’s work: ‘His female subjects are positive and empowered and they are also vulnerable. In the visceral way he models their forms – with fine cross-hatching and repeated lines – the artist evokes the fragility of the human body, and human life itself.’

Larter exhibited for over six decades and produced a diverse oeuvre of figurative and abstract paintings, collages and mixed media works. His Stripperama series from the 1960s was reshown at the Heide Museum of Modern Art in 2002, and a major retrospective, Richard Larter: Retrospective, was staged at the National Gallery of Australia in 2008. In 2011 he received an Order of Australia Medal for his services to the arts. He died in 2014.