Provenance
Gitte Weise Gallery, Sydney
Acquired by the present owner from the above in 2001

Exhibited
Another work from this edition was exhibited in unquiet landscapes of Rosemary Laing, 2005, Museum of Contemporary Art, Sydney, 23 March-5 June 2003


Migration and the adaption to a new environment are concerns of a growing number of Australians, as our population escalates. In Laing's series groundspeed, 2001, the artist symbolically captures the process of colonisation and the domestication of our native environment. In a panoramic photograph, stage-directed rather than manipulated through digital methods, Laing has invaded the natural South Coast landscape with the 1970s British Royal Persian Rose Petal carpet, not only as a symbol of invasion but of the domestication of the land.

"In areas of dense vegetation on the New South Wales south coast and on a rocky shore with the ocean crashing in the background, Laing laid and photographed ornately patterned carpets. The carpets follow the contours of the site, seamlessly edging trees, rocks and undergrowth to appear at one with the natural environment, foliage and woven patterns meshing decoratively across the photographic surface. Yet of course, their occupation is temporary - a staged, fundamentally rhetorical act for the purpose of creating the photographs. The dated, decorative carpets act as emblems of colonial occupation, of the domestication of the natural environment in a attempt to remake 'home' here. " (Blair French, 'Rosemary Laing', Twelve Australian Photo Artists, Sydney, 2009, p. 93) 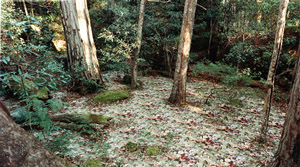 Image is courtesy of the artist and Tolarno Galleries, Melbourne